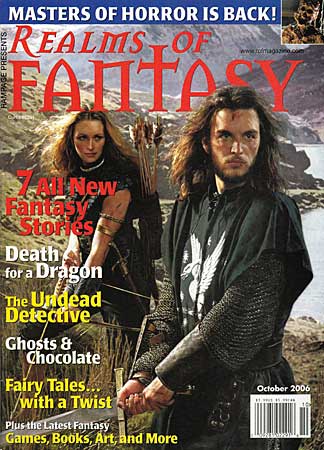 
Matt used his key, and the collar clanged to the floor. The dragon unfurled, and slithered forward, everything about it gaunt. Built into its spine were two seats, one behind the other. Matt placed his shoe on the dragon’s shoulder, a fist-shaped protrusion of bone, and swung into the driver’s seat.
The dragon circled me, watching me with eyes the color of blood. Its face was skeletal, as if the manufacturer hadn’t had enough skin to give it cheeks or lips. You could always see its teeth, like black swords, even when its jaws were fully closed. I hesitated.
Matt said, “Come on. What are you afraid of?”
“They drink blood,” I said simply. That seemed sufficient reason to show caution.
“Of virgins,” he said. “You’re not a virgin, right?” As if that was unthinkable.
I chuckled and said, “No.” Though I was.

First semester at college isn’t easy, especially when
lots of kids ride around on dragons. Dragons that drink blood. Blood of virgins.

David discussed “Blood of Virgins” during a 2006 radio interview. For details see the Press page.
Comment on this story at the Escape Pod message board. 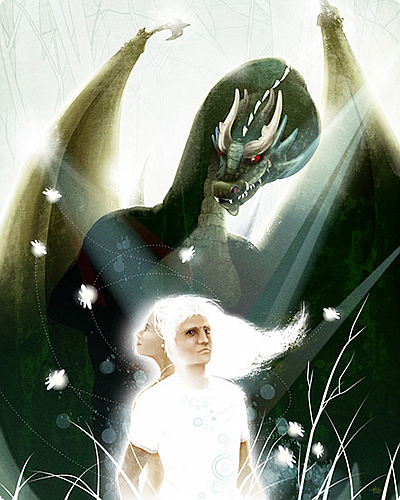 “This was the best issue of 2006 in my opinion. My favorite story was
‘Blood of Virgins’ by David Barr Kirtley. I don’t think I’d ever read such
a take on the theme of dragons before, and this story continually kept
surprising me. I bet this one gets reprinted a lot over the years.”

“This story really could be subjected to deep
Jungian analysis, examining the dragons in this modern society
as an archetype analogous to many temptations and social pressures
on our own. Personally, I didn’t think there were any virgins in
college anymore, but Kirtley made me believe in them, as well as
dragons. This story has more depth than its light premise implies.”

“As far as raw controversy goes, ‘Blood of Virgins’ brought a lot of debate around here.”

– Jonathan Gillespie, Escape Pod message board, re: most influential episode