A month later Simon stood and regarded the tree of Victor Archimagus.

It was gigantic, its trunk as wide around as a castle wall. A good way up, the trunk split into a great V — the two branches that had grown upon the births of Victor’s sons, Franklin and Atherton. From there the branches continued to climb and divide — one for each legitimate male heir — and now over a hundred descendants of the late wizard resided within the tree’s luxurious chambers. (Female children were married off and sent away — Victor had never been a terribly enlightened sort.) The tree was a virtuoso feat of spellcraft, the first of its kind, and upon its creation Victor had been so impressed with himself that he’d taken the surname Archimagus — master wizard. Simon was the only one to have successfully replicated the spell. Families that possessed the rare gift of magic seemed always to be afflicted with low fertility, but the fact that Victor’s tree grew larger and grander depending upon the number of offspring had ensured a frenetic effort to proliferate his adopted surname, and had also — perhaps inevitably — led to a rivalry between the descendants of Franklin and the descendants of Atherton over who could produce the greatest number of male heirs. At the moment it happened that the two halves of the tree were in perfect balance. Today’s presentation ceremony for Bernard’s infant son would change that.

The tree-dwelling Archimagus family is bitterly divided between the descendants of Franklin and the descendants of Atherton. Simon, the Franklin clan’s most talented wizard, long ago separated himself from his troublesome relatives. But when he hears that Meredith, the Atherton side’s greatest sorceress, has returned home, Simon finds himself drawn back into the tangled web of family politics. As schemes and rivalries swirl around him, Simon must ask himself: Can he defeat Meredith? And does he want to?
This story is free to read online. 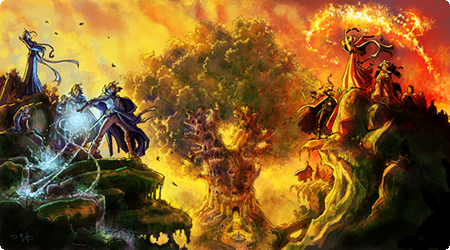 The Way of the Wizard contains 32 stories of sorcery and wonder. “Family Tree” is one of several stories that are free to read online. Here’s the complete table of contents:

“In the Lost Lands” by George R.R. Martin
“Family Tree” by David Barr Kirtley
“John Uskglass and the Cambrian Charcoal Burner” by Susanna Clarke
“Wizard’s Apprentice” by Delia Sherman
“The Sorcerer Minus” by Jeffrey Ford
“Life So Dear Or Peace So Sweet” by C. C. Finlay
“Card Sharp” by Rajan Khanna
“So Deep That the Bottom Could Not Be Seen” by Genevieve Valentine
“The Go-Slow” by Nnedi Okorafor
“Too Fatal a Poison” by Krista Hoeppner Leahy
“Jamaica” by Orson Scott Card
“The Sorcerer’s Apprentice” by Robert Silverberg
“The Secret of Calling Rabbits” by Wendy N. Wagner
“The Wizards of Perfil” by Kelly Link
“How to Sell the Ponti Bridge” by Neil Gaiman
“The Magician and the Maid and Other Stories” by Christie Yant
“Winter Solstice” by Mike Resnick
“The Trader and the Slave” by Cinda Williams Chima
“Cerile and the Journeyer” by Adam-Troy Castro
“Counting the Shapes” by Yoon Ha Lee
“Endgame” by Lev Grossman
“Street Wizard” by Simon R. Green
“Mommy Issues of the Dead” by T. A. Pratt
“One Click Banishment” by Jeremiah Tolbert
“The Ereshkigal Working” by Jonathan L. Howard
“Feeding the Feral Children” by David Farland
“The Orange-Tree Sacrifice” by Vylar Kaftan
“Love is the Spell That Casts Out Fear” by Desirina Boskovich
“El Regalo” by Peter S. Beagle
“The Word of Unbinding” by Ursula K. Le Guin
“The Thirteen Texts of Arthyria” by John R. Fultz
“The Secret of the Blue Star” by Marion Zimmer Bradley
“There were some seriously outstanding stories in this collection … ‘Family Tree’ asks the rather pointed question: what happens when most in the family are magical? How do you deal with conflict, and jealousy, and the conflagrations that inevitably occur — especially when you’re living on top of each other?
-Not If You Were the Last Short Story on Earth