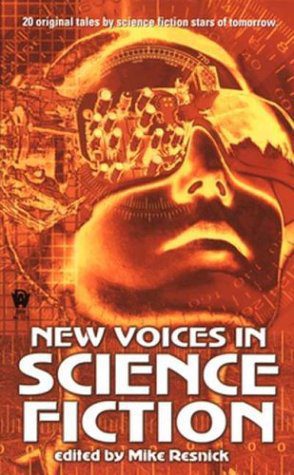 
Spade opened his drawer and took out an iron file. He began scraping away at the bird’s leaden neck.
The bird chuckled. “Oh. You’re getting even warmer now.”
Lead filings flaked away. Spade scraped deeper and deeper. Finally, something began to emerge beneath the lead. Spade took a deep breath and blew, sending filings flying away into the smoky air.
Beneath the lacquer and the lead, the bird was made of gold and jewels, which glowed and sparkled even in the dim light of Spade’s office. “Congratulations,” the bird cried, “You solved the mystery!”
“Something’s not right here,” Spade said.
He took up his pocketknife again, and poked the largest jewel. The tip of the knife sank a few centimeters in, as if the jewel were made out of chocolate. Carefully, Spade started scraping it away altogether. Beneath, was something else.
“Oh boy,” said the bird. “Now you’ve done it. The plot thickens–”


Dashiell Hammet’s Sam Spade discovers that the Maltese Falcon is also
Edgar Allan Poe’s Raven in this darkly twisted philosophical tale.
This story is free to read or listen to online.
New Voices in Science Fiction is an
anthology of stories by “science fiction stars of tomorrow.”
Here’s the table of contents:

The Dragon Done It is an
anthology of supernatural detective stories.
Here’s the table of contents:

Introduction by Mike Resnick & Eric Flint
“The Long and Short of It” by Mike Resnick
“Dead Wolf in a Hat” by Graham Edwards
“This Town Ain’t Big Enough” by Tanya Huff
“The Case of the Four and Twenty Blackbirds” by Neil Gaiman
“The Whistling Room” by William Hope Hodgson
“Doppelganger” by Laura Resnick
“Claus of Death” by Michael M. Jones
“McNamara’s Fish” by Ron Goulart
“Gunsel and Gretel” by Esther M. Friesner
“Alimentary, My Dear Watson” by Lawrence M. Schimel
“Fox Tails” by Richard Parks
“A Case of Identity” by Randall Garrett
“The Case of the Skinflint’s Specters” by Brian Thomsen
“The Black Bird” by David Barr Kirtley
“The Enchanted Bunny” by David Drake
“The Adventure of the Pearly Gates” by Mike Resnick
“The Seventh Chapter” by Harry Turtledove
“The Detective of Dreams” by Gene Wolfe
“The Witch’s Murder” by Dave Freer and Eric Flint 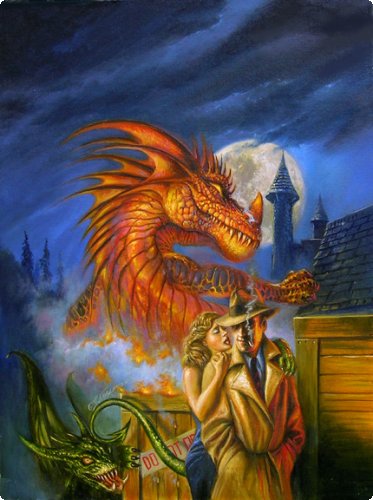 Cover illustration by Bob Eggleton for the anthology
The Dragon Done It. Used with permission.

David wrote “The Black Bird” at the 1999 Clarion writers workshop.


“My guess is that, fifteen or twenty years from now, when the historians
of the field name the ten best writers to break in within three years,
either direction, of the millennium, you’ll find at least half of them in [New Voices in Science Fiction].”


“Award-winning writers, all early in their careers, all destined
to leave their mark on the genre. This new wave is eclectic and witty,
serious and silly, and whether they’re on about the new space opera
or modern fantasy, they all seem to be having fun doing it …
David Barr Kirtley leads [New Voices in Science Fiction] with ‘The Black Bird’ …
call it a magical-realist-noir-detective piece.”


“Incredibly diverse (stories run the gamut from hard-core sci-fi
to horror to sardonic fiction) and utterly enthralling, [New Voices in Science Fiction]
is a winner.”


“Editor Mike Resnick’s New Voices in Science Fiction is another
excellent anthology. These 20 short tales blur the traditional
lines between sci-fi and fantasy … This collection is a good
place for newcomers to enter the genre, or for current sci-fi
fans to pick up an author sure to please.”