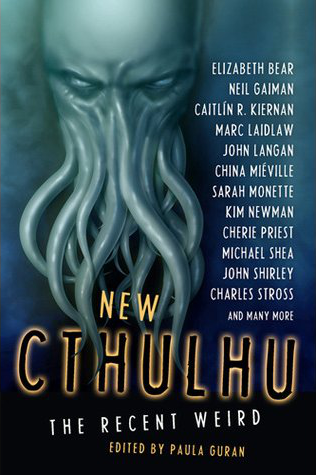 
I returned to my room. When my new roommate entered, I recognized him immediately. I said, “You’re–“
“Adrian,” he replied.
I finished, “–the one who can make the cat bleed.”
He stared at me. “I can do a lot of things. I’m the best in the class, and Brose knows it.”
“We’ll see,” I said. I was jolted by the way Adrian seemed to have figured me out. I couldn’t believe this was an accident, the way his words seemed calculated to tear at my greatest longing: to be favored, to be adored.
I added, “It was only a cat.”
He tensed. “You think I should’ve used something bigger?”
Before I could answer, I felt a wetness on my upper lip. I hurried to the mirror. Blood leaked from my nostrils and coated my mouth and chin.
I gasped, and seized a nearby towel. I leaned my head back and mopped my face.
Adrian ordered, “Don’t lean back. Keep pressure on your nose. The bleeding will stop.”


Seekers after dark power are drawn to Professor Carlton Brose, who teaches a class on the occult at a New England university. But ultimate power comes at the ultimate price, and there are some things that should not be adored.

Weird Tales is the legendary magazine that gave birth to H.P. Lovecraft and the “Lovecraft circle” of Cthulhu-mythos writers. This issue, edited by George H. Scithers and Darrell Schweitzer, also includes fiction by Stephen Woodworth, Ian Watson, and Keith Taylor. 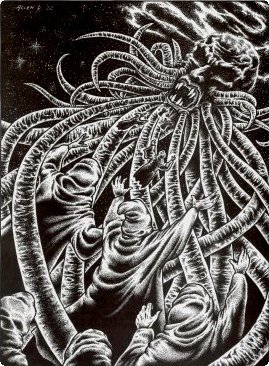 Illustration by Allen Koszowski for
Weird Tales. Used with permission.

New Cthulhu, edited by Paula Guran, collects some of the best Lovecraftian fiction from 2000-2010. Here’s the table of contents:

“The Crevasse” by Dale Bailey & Nathan Ballingrud
“Old Virginia” by Laird Barron
“Shoggoths in Bloom” by Elizabeth Bear
“Mongoose” by Elizabeth Bear & Sarah Monette
“The Oram County Whoosit” by Steve Duffy
“Study in Emerald” by Neil Gaiman
“Grinding Rock” by Cody Goodfellow
“Pickman’s Other Model (1929)” by Caitlin Kiernan
“The Disciple” by David Barr Kirtley
“The Vicar of R’lyeh” by Marc Laidlaw
“Mr Gaunt” by John Langan
“Take Me to the River” by Paul McAuley
“The Dude Who Collected Lovecraft” by Nick Mamatas & Tim Pratt
“Details” by China Mieville
“Bringing Helena Back” by Sarah Monette
“Another Fish Story” by Kim Newman
“Lesser Demons” by Norm Partridge
“Cold Water Survival” by Holly Phillips
“Head Music” by Lon Prater
“Bad Sushi” by Cherie Priest
“The Fungal Stain” by W.H. Pugmire
“Tsathoggua” by Michael Shea
“Buried in the Sky” by John Shirley
“Fair Exchange” by Michael Marshall Smith
“The Essayist in the Wilderness” by William Browning Spencer
“A Colder War” by Charles Stross
“The Great White Bed” by Don Webb


Dead But Dreaming collects 15 tales of cosmic horror inspired by H.P. Lovecraft. The book was edited by Keith Herber and Kevin Ross, award-winning authors and Call of Cthulhu game designers who have been writing and editing Lovecraftian material for over 30 years.

This was David’s first anthology appearance. Unfortunately, due to very bad timing, only 75 copies were printed. The book became a valued collector’s item, with copies of this $18 volume selling for over $250. The book has now been reprinted by Miskatonic River Press.

Here’s the table of contents:

A Foreword by Keith Herber
More Foreword by Kevin Ross
“Epiphany: A Flying Tiger’s Story” by Stephen Mark Rainey
“The Aklo” by Loren McLeod
“Bangkok Rules” by Patrick Lestewka
“Why We Do it” by Darrell Schweitzer
“The Disciple” by David Barr Kirtley
“Salt Air” by Mike Minnis
“Through the Cracks” by Walt Jarvis
“The Unseen Battle” by Brian Scott Hiebert
“Bayer’s Tale” by Adam Niswander
“The Call of Cthulhu: The Motion Picture” by Lisa Morton
“Under an Invisible Shadow” by David Bain
“The Thing Beyond the Stars” by Robin Morris
“Fire Breathing” by Mehitobel Wilson
“The Other Names” by Ramsey Campbell
“Final Draft” by David Annandale

Pseudopod is a weekly podcast of horror short stories in audio format. “The Disciple” was performed by Matthew Wayne Selznick.

“My vote for favorite story of the issue. It’s wonderfully creepy.”
– Gregory J. Chapmann, letters to the editor, Weird Tales #329

“That was the greatest Pseudopod yet. Lovecraftian and twisted. Perfect.”
– Leon Kensington, Pseudopod message board