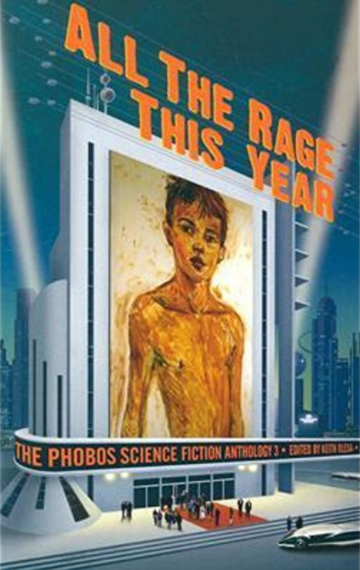 
Something strange is happening to me.
We’re at Conrad’s vacation house, a sprawling mansion that orbits the gas giant Hades-3. (His father owns both the house and the planet.) Conrad is in the living room watching sports. His girlfriend Alyssa is standing by the mirror in the bathroom, fixing her hair. Her friend Kat is sitting near the bay windows, watching the stars and the roiling vermeil clouds on the world below. Dillon is in the kitchen, mixing drinks. Brad is slouched on the sofa, watching everyone with a lazy smile.
And I don’t know which of them I am.
Perception shifts. A few moments of Alyssa, running my fingers through silky hair. A moment of Dillon, using my knife to slice limes for the drinks. A moment of Kat, feeling awe of those looming bands of color, of those constantly churning swirls that look so majestic, and make me feel so insignificant. Then Conrad — pride at my team’s success, at my father’s wealth.
Then Brad. I feel quite smug. “It’s starting to work,” I tell them. “You can all feel it, can’t you?”


Brad’s friends were always nasty to him, and to each other. So he
slipped them a strange alien drug. It made them all share each
other’s sensations, and lose track of who they were. He hoped it
would make them show more regard for one another. And it worked,
but not at all in the way he might have hoped.

This story (and its title) were inspired by a thought experiment
proposed by political theorist John Rawls in his book Political Liberalism.


The winning stories appear in the anthology All the Rage This Year. Here’s the table of contents:

“Veil of Ignorance” by David Barr Kirtley
“The Man Who Murdered Himself” by Nancy Fulda
“All the Rage This Year” by David Walton
“And Cry the Name of David” by Virginia Baker
“Golden Town” by Daniel Conover
“The Second Chance of Clevon Walker” by Eric Griffin
“The Man Who Moved the Moon” by Eric James Stone
“The Big Shot” by Susan Fry
“Two Rooms and All the Electricity You Can Eat” by M.T. Reiten
“Dissident” by Julie Hyzy
“The Walls Within” by Lane Robins
“Earl Billings and the Angels of the Lord” by James Maxey

An audio adaptation of “Veil of Ignorance” was
produced for the March/April 2006 issue of MechMuse.
This issue also includes fiction by New York Times Bestseller David Farland,
as well as Richard Raleigh, Edmund R. Schubert, Miles Romney, and Francis Stevens. “Veil of Ignorance”
was peformed by Rick Jelinek.

Illustration by Jesus Garcia Lopez for MechMuse. Used with permission.

David substantially rewrote “Veil of Ignorance”
based on feedback at the 2003 Writers Workshop hosted by James
Gunn at the University of Kansas.

David discussed “Veil of Ignorance” during a 2005 radio interview. For details see the
Press page.

“If you have not read a Kirtley, ‘Veil of Ignorance’ is a great
place to start. Lovers of George R. R. Martin or thought-provoking
science fiction will take great pleasure in this.”


“‘Veil of Ignorance,’ by David Barr Kirtley, reminded me pleasantly
of the work of Philip K. Dick in its exploration of drugs and
consciousness … All the Rage This Year is a collection
of well selected and rewarding stories. I read several of them
more than once (unusual for someone like myself who always has an
overflowing stack of things to read) and hope to see more from
all the authors in this anthology.”
– SF Site