My grandfather Roger Barr passed away early this morning at the age of 98. He was my mom’s father, and was my last surviving grandparent. He was being cared for by my uncle Steve (his son) and aunt Denice — both medical professionals — and was still sharp and good-humored in his final days. Yesterday Steph Grossman and I got word that he had become unresponsive, and we were able to speak to him one last time via phone. Hopefully he was aware of us at some level, even if he couldn’t answer. Roger served in the Pacific during World War II, translating Japanese communications. He got engaged to my grandmother, Ruth, shortly before leaving for the war, and they were married for over 70 years, until her death in 2014. They lived almost that entire time in Sacramento, California, where Roger ran a small optometry shop and Ruth worked as his office manager. They were heavily involved with their local Unitarian church, and were regulars at a local Scottish dance group. Both of them were big readers. Ruth ran a book club for decades, and one of Roger’s proudest possessions was a leather-bound set of the complete works of Shakespeare that he spent several months saving up for as a young man. He was particularly interested in religion, and was always talking about the latest Biblical scholarship. I remember him once mentioning offhandedly that he had read the Book of Mormon several times for fun. He was also an avid hiker and fitness fanatic. Most mornings he would walk down the block to the local school and run five miles around the soccer field. He would spend weeks at a stretch backpacking in national parks, and even into his 90s he was still regularly climbing to the top of a nearby hill, carrying a backpack full of bricks (because doing it without the bricks was too easy). He was probably the most cheerful, happy-go-lucky person I’ve ever met, and his unbridled optimism almost led to disaster on any number of occasions. (His backpacking stories were full of occasions when he got caught in a blizzard, buried in an avalanche, almost fell off a cliff, faced off with a wildcat, killed a rattlesnake with his walking stick, etc.) Ruth accompanied him on many of these trips, and after he retired they circled the United States in an RV several times. As recently as last year Roger was still getting regular exercise, riding a recumbent tricycle around the parking lot of his assisted living facility. I’m sad that he’s gone, but he certainly lived a life that’s about as long, healthy, happy, and rich in experience as it’s possible to have. He is survived by his four children, six grandchildren, and one great-grandson. 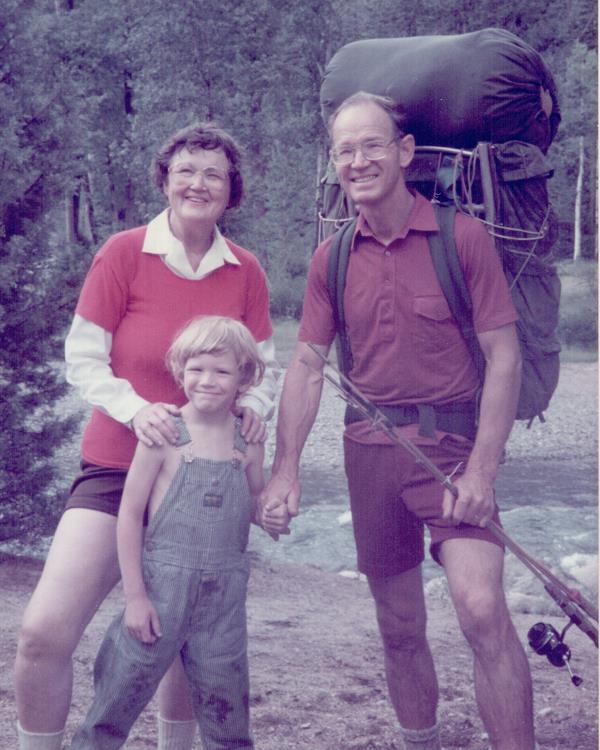