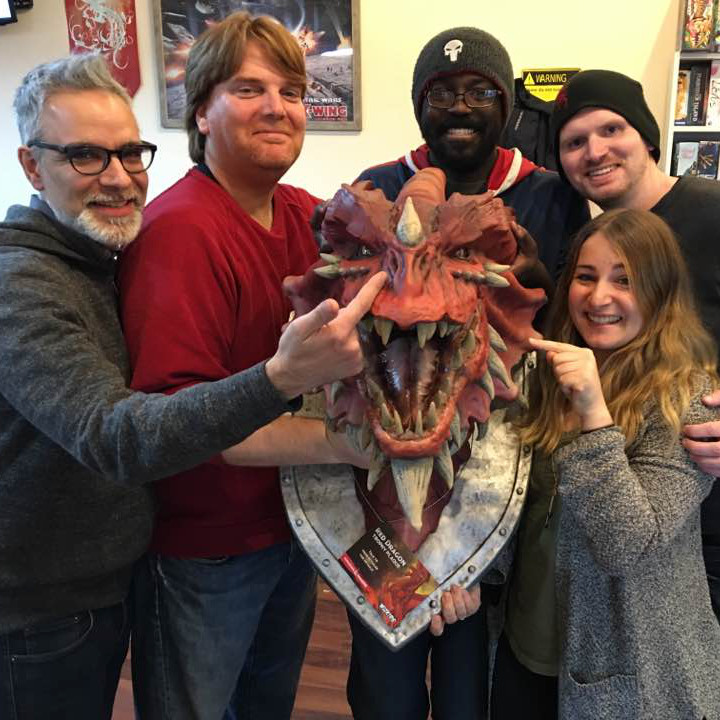 I grew up in the small town of Katonah, in northern Westchester, in the suburbs of New York City, with my parents — two PhD scientists fond of books, the outdoors, travel, current events, and classical music. When I was very young, my parents — both fantasy & science fiction fans — read me the novels of Robert Heinlein, Madeleine L’Engle, William Sleator, and J.R.R. Tolkien, and also (when I was a bit older) introduced me to other great writers such as Isaac Asimov and Larry Niven. Throughout my childhood I had a passion for writing and drawing, and I generated boxes full of picture books, short stories, comics, and all manner of pen & pencil games. In Day Care, I would create toys out of paper and tape and sell them to my friends.

When I was in first grade, my best friend handed me a book and said, “You’ve got to read this.” The book was Myth Conceptions by Robert Asprin (Book 2 in his Myth series). As class began, I glanced at the opening line, which went: “Of all the various unpleasant ways to be aroused from a sound sleep, one of the worst is the noise of a dragon and a unicorn playing tag.” I was captivated. The teacher yelled at me several times to put the book away, and finally threatened to confiscate it, so I had to wait the entire school day before I could run home and finish the book. I read the whole series dozens of times. There were certain things about those stories that particularly appealed to me — the brisk pacing, the humor, the familiar fantasy elements made fresh, the parallel worlds, and most of all the deep sympathy for (and solidarity with) those who are looked down on because they’re different.

When I was twelve, I wanted to find another humorous fantasy series similar to the Myth books. In those days before the internet, there was practically no information available about fantasy & science fiction titles, so the only option was to walk down to the local book shop (which had a fantasy & science fiction section about the size of a medicine cabinet) and browse. I came across a novel called The Guns of Avalon by Roger Zelazny (Book 2 in his Amber series). The cover, which showed cartoonish gremlins lurking amidst giant toadstools, was so goofy that I assumed the book must be a comedy, and purchased it. The cover had misled me badly, but I wasn’t complaining. The Guns of Avalon turned out to be one of the most wonderful novels I’ve ever read, a mind-blowing mix of Arthurian fantasy, hard-boiled detective fiction, and Jacobean revenge drama, dense with allusions to Shakespeare and philosophy, written in stylish, poetic prose, and featuring a wisecracking Byronic hero. The novel also possessed many of the same qualities I’d enjoyed in the Myth books — brisk pacing, humor, a fresh spin on familiar fantasy notions, parallel worlds, and sympathy for the so-called “demons.” Amber became my new favorite series. I was (and still am) inspired by how effortlessly these books combine vast erudition with page-turning fun.

My teachers were almost uniformly glowing about my writing. When I was in middle school, one of my English teachers liked a story of mine so much that she read the story out loud as a model to every section of her class. Shortly after that, one of the most popular girls in the school, on whom I had a massive crush and who had never spoken to me before, took a break from a conversation with her friends and said to me, “Hey, are you the one who wrote that story that Mrs. Tebbe read?” I said, “Yeah,” and the girl said, “It was good,” and went back to her conversation, and I was thrilled. Other teachers who particularly encouraged me were Bob Lazzaro, my 4th grade teacher, who was a science fiction fan, Mary Winsky, who taught special writing classes in my school district throughout my time there, and John Keane, one of my high school English teachers. The last time I saw Mr. Keane, he said that I was the best student writer he’d ever seen, and told me, “You’re going to be a writer, I mean that,” and he kept repeating it, over and over, to make sure I got the message. At the time I was a little embarrassed, but much later, when I began to appreciate just how daunting and difficult the life of a fiction writer is, it meant a lot to me that he’d known what I’d be facing and had tried to fortify me as best he could. By that time I had started publishing short stories in magazines such as READ and Merlyn’s Pen that showcased student writing.

I enrolled as an undergrad at Colby College in Waterville, Maine, where I studied Government (with an emphasis on Constitutional law and political philosophy), with a minor in Creative Writing. I picked Colby because I could take creative writing classes there without being an English major, and because I had seen that the school offered a class in science fiction, so I figured that at least one member of the English faculty would be young and cool and contemporary. Unfortunately, that person was gone by the time I arrived, and no one I actually studied with knew anything about science fiction. In the fiction workshops, students were required to write nothing but contemporary realism, so with a sigh I set my personal interests aside and, just like all the other students, started writing fiction about boozed-out, lovelorn undergraduates. This wasn’t all bad, since I was eventually able to use the techniques I’d developed while writing those stories to inform some of my subsequent, non-realistic pieces such as “Blood of Virgins” and “Save Me Plz.” And I did have one really great writing instructor, Professor Boylan.

During my freshman year, I won first prize in an undergraduate fiction contest sponsored by Asimov’s magazine, who flew me to Ft. Lauderdale for the International Conference on the Fantastic in the Arts, which was my introduction into the wider community of fantasy & science fiction writers and editors. Two years later, I saw that my new favorite writer, James Morrow, author of a number of wildly imaginative and fiercely iconoclastic novels, was going to be teaching at the six-week Clarion summer writing workshop, so I applied, which turned out to be one of the most important things I ever did. The workshop improved my writing, greatly broadened my horizons, and introduced me to a few of the best friends I’ve ever made.

After college I bounced around, and eventually moved back home to New York. I became obsessed with doing everything I could to improve my writing. I read from start to finish massive tomes such as The Encyclopedia of Science Fiction, The Encyclopedia of Fantasy, The Penguin Dictionary of Literary Terms and Literary Theory, The Norton Anthology of Poetry, and Metaphors Dictionary. I attended more writing workshops, one every two years or so — Odyssey, the CSSF Workshop, Orson Scott Card’s Literary Boot Camp, Viable Paradise. Odyssey instructor Jeanne Cavelos suggested that I should try retyping a short story by one of my favorite authors in order to more closely analyze the writing style. I thought this was a great idea, but then I started thinking — if doing a short story is good, then retyping a whole novel would be even better. And if typing it would be good, then copying it out by hand would be better still. Thus was born one of my favorite hobbies — transcribing books in order to study their literary technique. (I’ve now done this with a number of novels — Marcel Proust’s Swann’s Way, George R. R. Martin’s A Game of Thrones, James Joyce’s Ulysses, Gene Wolfe’s The Shadow of the Torturer, Gabriel Garcia Marquez’s One Hundred Years of Solitude, Vladimir Nabokov’s Lolita, and China Mieville’s The Scar — and I keep picking up new techniques all the time.)

I kept writing and writing and writing. My fiction slowly began to appear in major magazines such as Realms of Fantasy and Weird Tales. (It was a special treat for me now to see my stories in Realms of Fantasy, the same magazine that published one of Roger Zelazny’s Amber stories back when I was a teenager.) Mike Resnick selected my story “The Black Bird” for his anthology New Voices in Science Fiction. I became a regular at the monthly fantastic fiction reading series at the KGB Bar, joined a local writers’ group, and was interviewed twice on WBAI 99.5 FM.

Then I moved out to Los Angeles to enroll as a grad student at the University of Southern California, where I studied fiction and screenwriting with well-known pros such as Irvin Kershner (director of Star Wars: The Empire Strikes Back), Janet Fitch (author of White Oleander), and T.C. Boyle (author of The Road to Wellville). During this period I wrote three stories that were published in Realms of Fantasy, and one of those stories, “Save Me Plz,” was selected for the anthology Fantasy: The Best of the Year, and was also listed on Locus magazine’s 2007 Recommended Reading List.

In 2008, my old friend John Joseph Adams started editing anthologies, and he reprinted my story “The Skull-Faced Boy” in his zombie horror book The Living Dead. That book ended up being a huge hit, and John quickly became a high-profile editor. He went on to edit a string of anthologies, including The Living Dead 2 and The Way of the Wizard, both of which I contributed stories to (“The Skull-Faced City” and “Family Tree”). John also began editing a new online science fiction magazine called Lightspeed, and my story “Cats in Victory” appeared in the debut issue.

By 2010 several of my stories had been adapted for podcasts such as Escape Pod and Pseudopod, and I had become a certified podcast junkie. I suggested to John that we should release a podcast episode of the two of us chatting about The Living Dead, and that idea eventually mushroomed into us doing a weekly interview/talk show for Tor.com that we called Geek’s Guide to the Galaxy, in honor of Douglas Adams. We produced 21 episodes for Tor.com, then moved the show over to io9.com for episodes 22 through 51. The show is currently hosted by Wired.com, the website of Wired magazine. We celebrated our 100th episode in December 2013, at which point John stepped down as full-time co-host, though he continues to appear as a regular guest geek.

In September 2013 I started dating Steph Grossman, who I had met the previous fall at a Karen Russell reading at the Center for Fiction in Manhattan. After living together for a few years in Astoria (and acquiring a cat named Oryx), we moved to Austin in 2019 so that Steph could pursue an MFA in Creative Writing at Texas State University. In February 2020 I interviewed my parents in Episode 400 of Geek’s Guide to the Galaxy, which marked the show’s ten-year anniversary. In November 2021, Steph and I got engaged at the ski basin overlooking Santa Fe, a location featured in Roger Zelazny’s Amber series. In February 2022 I published my first book, a short story collection called Save Me Plz and Other Stories.

And I guess that pretty much brings us up to the present. Thanks for reading. For more on me, also check out my blog.