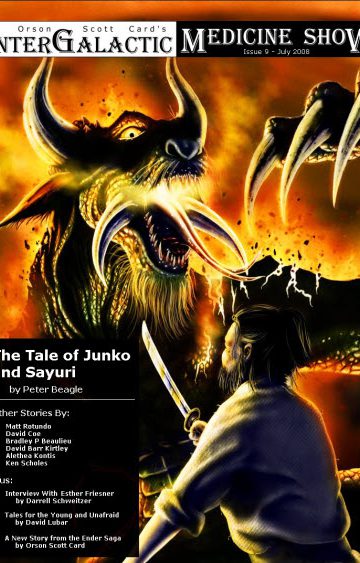 
One night at dusk, as Francis and Benjamin crossed a field of long grass, Francis suddenly stopped and said, “What’s that?”
Benjamin halted and looked around, but saw nothing. “Where?”
Francis cocked his head. “Listen.” Then a look of alarm crossed his face, and he said, “Get down.” He crouched and grabbed Benjamin by the shirtfront and pulled him down too. Francis scanned the sky. Then he slid his sword from its scabbard with one smooth motion, and the sword made barely a whisper as it came free.
Benjamin was suddenly afraid. He looked into the sky, which was blue and tan in the fading light. “What? What is it?”
Francis said sternly, “Shhh!” He cocked his head again.
Benjamin waited. A breeze rustled the grass overhead.
Then Francis said, “Damn!,” and leapt to his feet. He grabbed Benjamin by the shoulder, pulled him up, shoved him, and said, “Run! Now!”
Benjamin ran. Everywhere blades of grass stood before him, and he pushed between them. The grass whipped at his face. Then a winged shadow fell over him.
A huge scaly foot plucked him from the earth. Talons bit into his sides. Above him beat great dark wings that sent cold air gusting down over him. He twisted to stare up at his captor. It was the dread predator, bane of all mice, the death that comes from above. Benjamin knew its name from a hundred childhood tales. Owl.


Benjamin, a young mouse, has published a pamphlet calling for the abolition of the monarchy, and for this he has been imprisoned for months in the dungeons beneath the great mouse city of Kingsburrow. Finally, Benjamin is offered freedom, but at a price — he must accompany the heroic King Francis into the wilds, to seek out the monster that slew Francis’ father.
InterGalactic Medicine Show is an online fiction magazine founded by legendary author Orson Scott Card (Ender’s Game) and edited by Edmund R. Schubert. This issue also includes fiction by Peter S. Beagle (The Last Unicorn), David B. Coe, Ken Scholes, Matt Rotundo, Bradley P. Beaulieu, and Alethia Kontis.
This story was produced as full-cast audio podcast, with David Barr Kirtley playing one of the lead roles.