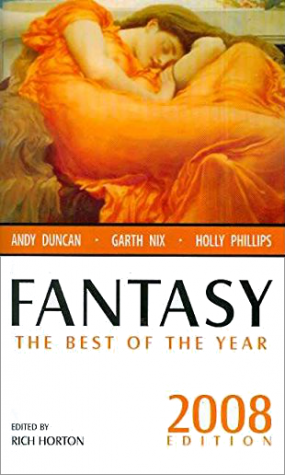 
Meg hadn’t heard from Devon in four months, and she realized that she missed him. So on a whim she tossed her sword and scabbard into the back seat of her car and drove over to campus to visit him.
She’d always thought that she and Devon would be one of those couples who really did stay friends afterward. They’d been close for so long, and things hadn’t ended that badly. Actually, the whole incident seemed pretty silly to her now. Still, she’d been telling herself that the split had been for the best — with her working full-time and him still an undergrad. It was like they were in two different worlds. She’d been busy with work, and he’d always been careless about answering email, and now somehow four months had passed without a word.
She parked in the shadow of his dorm, then retrieved her sword and strapped it to her jeans. She approached his building. A spider, dog-sized and iridescent, rappelled toward her, its thorned limbs plucking the air. She dropped a hand to the hilt of her sword. The spider wisely withdrew, back to its webbed lair amid the eaves.

Meg broke up with Devon after he got too obsessed with a fantasy video game.
Now he’s vanished. There’s only one thing to do — strap on her sword and go looking for him.


Fantasy: The Best of the Year 2008, edited by Rich Horton, is an anthology that
collects many of the best fantasy short stories published in 2007.
Here’s the table of contents:

“Unpossible” by Daryl Gregory
“Light” by Kelly Link
“The Teashop” by Zoran Zivkovic
“The Rope” by Noreen Doyle
“Buttons” by William Alexander
“Brother of the Moon” by Holly Phillips
“A Diorama of the Infernal Regions” by Andy Duncan
“Heartstrung” by Rachel Swirsky
“Something in the Mermaid Way” by Carrie Laben
“Public Safety” by Matthew Johnson
“Stray” by Benjamin Rosenbaum and David Ackert
“The Comb” by Marly Youmans
“Sir Hereward and Mister Fitz Go to War Again” by Garth Nix
“The Last Worders” by Karen Joy Fowler
“Singing of Mount Abora” by Theodora Goss
“Save Me Plz” by David Barr Kirtley
“Bufo Rex” by Erik Amundsen
“The Master Miller’s Tale” by Ian R. MacLeod
“The Cambist and Lord Iron” by Daniel Abraham 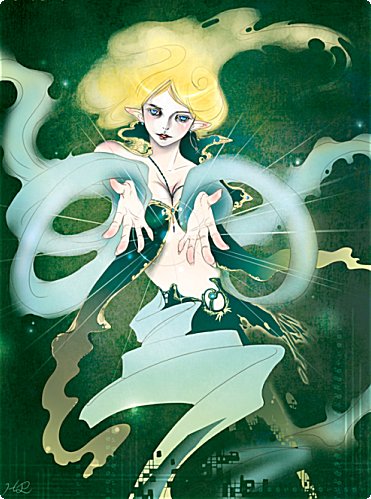 Illustration by HyeJeong Park for Realms
of Fantasy magazine. Used with permission.

“I loved this story, and its subtlety. It reminded
me, at times, of Zelazny’s edging into Amber. As a person who has lost
people into that other world, hearing a story about a crossover into
our world was stunning. Very well done!”
-jh, Escape Pod message board

“First time poster, been listening to the podcast
for months. This one connected with me enough in such a way that I
felt compelled to come here and post. I am a former MMO addict, and
during the height of my time in the game I really had the feeling that
it was my life. The end of the piece rung some sort of bell, along
with Meg’s emotional reaction. Keep up the awesome work!”
-mattatarms, Escape Pod message board

“Brilliant! I particularly loved the giant spider and bats.
There is, of course, one other sci-fi movie this strongly reminds me of, but I
will not mention it here. David Barr Kirtley — brilliant story, but please
please please don’t make a sequel. Not a second. Not a third. This is
perfect just as it is.”
-robertmarkbram, Escape Pod message board

“I am SURE that I dated that guy in college.
Brilliant programmer, always spouting some self-important wisdom,
never went to class, got high a lot, WAY into gaming, dropped out.
I am sure that was him the story was about.”