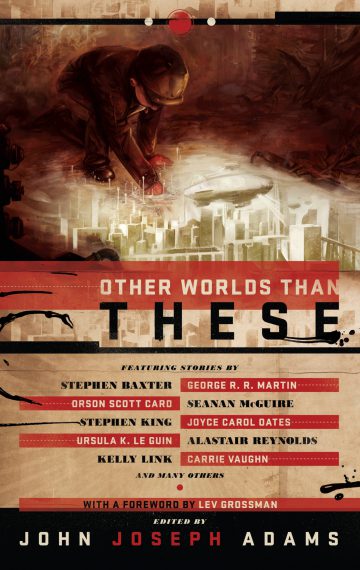 “Okay,” she said, as we went, “you know that there are different worlds, and that it’s possible to open portals between them. The first thing you have to understand is that not all worlds are created equal. Some are more real than others.”
I chimed in, “But who’s to say what’s real and what isn’t?”
“Oh,” she said. “We use this.” She reached into the knapsack and pulled out a device that looked like a black-and-purple striped candy cane. “It’s called an O-meter. Each world, and everything native to it, has a specific Ontological Factor, or OF, which is what the machine measures. Here, I’ll show you.”
She pointed the device at me, and sections of it lit up in sequence until about half its length was glowing.
“See?” she said. “You’re a five.”
“Oh,” I said. “Is that good?”
“No,” she said.
“Oh.”
“But hey, it could be worse. Like those degenerates you ran into earlier. Twos. Total figments. Not real enough to do any damage even to you.”
So that’s why I’d survived the attack of the fish-men, I thought. That made sense. Sort of.
“What number are you?” I asked.
“Ten,” she said. “Obviously.”

Steve, a nervous college grad obsessed with philosophical conundrums, discovers that his great uncle’s mansion is full of doorways to other worlds.