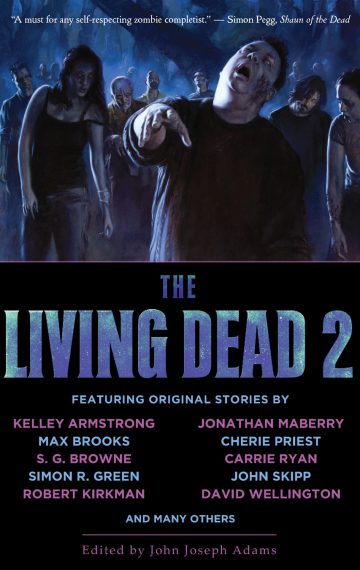 
The pair stood, and marched. The woman glanced back at Park.
“Eyes front,” he ordered.
She gasped. “Oh my god.” To the man she hissed frantically, “He’s one of them! The ones that can talk.”
The man turned to stare too, his face full of terror.
“Eyes front!” Park shouted.
The man and woman looked away. After a minute, the woman said quietly, “Are you going to eat us?”
“I don’t intend to,” Park said.
“So why do you want us?” she asked.
“It’s not me that wants you,” Park answered.
“Who does then?” the man demanded.
For a long moment Park said nothing. Then he removed his goggles, exposing dark sockets and two huge eyeballs threaded with veins. He yanked off his ski mask, revealing a gaping nose cavity, bone-white forehead and cheeks — a horrific skull-visage.
“You’ll see,” he said.

The zombie army of Dustin the skull-faced boy has grown legion, and has constructed a grim necropolis for him to rule over alongside his reluctant bride, Ashley. His followers are urged to carve off their faces, and bounty hunters are sent out from the city to bring back living prisoners, for purposes unknown. Can anyone put an end to Dustin’s mad, paranoid reign?

The Living Dead 2 contains 44 stories of zombie horror. “The Skull-Faced City” is one of several stories that are free to read online. Here’s the complete table of contents:


“Alone, Together” by Robert Kirkman
“Danger Word” by Steven Barnes & Tananarive Due
“Zombieville” by Paula Stiles
“The Anteroom” by Adam-Troy Castro
“When the Zombies Win” by Karina Sumner-Smith
“Mouja” by Matt London
“Category Five” by Marc Paoletti
“Living with the Dead” by Molly Brown
“Twenty-Three Snapshots of San Francisco” by Seth Lindberg
“The Mexican Bus” by Walter Greatshell
“The Other Side” by Jamie Lackey
“Where the Heart Was” by David J. Schow
“Good People” by David Wellington
“Lost Canyon of the Dead” by Brian Keene
“Pirates vs. Zombies” by Amelia Beamer
“The Crocodiles” by Steven Popkes
“The Skull-Faced City” by David Barr Kirtley
“Obedience” by Brenna Yvanoff
“Steve and Fred” by Max Brooks
“The Rapeworm” by Charlie Finlay
“Everglades” by Mira Grant
“We Now Pause For Station Identification” by Gary Braunbeck
“Reluctance” by Cherie Priest
“Arlene Schabowski Of The Undead” by Mark McLaughlin & Kyra M. Schon
“Zombie Gigolo” by S. G. Browne
“Rural Dead” by Bret Hammond
“The Summer Place” by Bob Fingerman
“The Wrong Grave” by Kelly Link
“The Human Race” by Scott Edelman
“Who We Used to Be” by David Moody
“Therapeutic Intervention” by Rory Harper
“He Said, Laughing” by Simon R. Green
“Last Stand” by Kelley Armstrong
“The Thought War” by Paul McAuley
“Dating in Dead World” by Joe McKinney
“Flotsam & Jetsam” by Carrie Ryan
“Thin Them Out” by Kim Paffenroth, Julia Sevin & RJ Sevin
“Zombie Season” by Catherine MacLeod
“Tameshigiri” by Steven Gould
“The Days of Flaming Motorcycles” by Catherynne M. Valente
“Zero Tolerance” by Jonathan Maberry
“And the Next, and the Next” by Genevieve Valentine
“The Price of a Slice” by John Skipp & Cody Goodfellow
“Are You Trying to Tell Me This is Heaven?” by Sarah Langan